I saw something amazing on Alibaba today.

If I had to do my motovan electrification all over again, I probably would have just bought this 10 kWh powerwall, a 48V inverter, a solar charger and a couple of solar panels for trickle charging, and call it done. Charge your Alta two times at the track silently for under $3K. 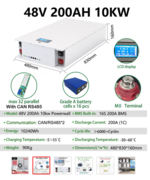 200lbs isn't horrible if you are permanently installing and rarely have the need to move it.

Reading more, this is only the battery/BMS. That explains the price point. You still have to supply the inverter, charger, solar controller, etc. Which I prefer anyway rather than all-in-one.

Without an independent internal inspection, it's hard to know the quality you are getting through alibaba. If going with economical chinese brands, it's nice to find ones that are consistent in build quality and have been around a while. I use a lot of SOK batteries which are well built. They even offer the 48v 100ah server rack batteries now. A couple of those 5.12Kwh batteries would be a good base for an in-vehicle charging setup.

One you have your batteries of choice, add some Victron components (AC/DC charger and inverter for 240v charger and a shunt-based monitor for accurate battery monitoring) and you are good to go. Add solar controller and solar panels if you like to slowly charge it back up during the week or a DC/DC charger if you want to charge as you drive.

OOPS! Yes, these are the correct prices. I was thinking it was $1,512 for the 10 kWh version, which would have been cheaper than 16x Shenzhen Basen LiFePO4 batteries alone, which is what appears to be in this 10 kWh powerwall, and which is also what I have in my van.

Yes, it is just a battery with a BMS and a display in one neat enclosure. A "Powerwall" in my mind would also have a built-in inverter. But I like that it is all assembled in one enclosure and neatly wired. A 10-year warranty is a bonus if they indeed honor it. These are good batteries, and with a BMS added they are likely to last a very long time.

Wau! In my opinion, the only way to charge several bikes at the same time at the track without complaints or discussions from the ICE riders. This is the solution for the poor infrastructure at the tracks without noise and, if solarcharged, even environmentaly the best technic. Must have!
C

Lots of possibilities out there at a lot of different quality and price points (and the two are not necessarily related).

SOK sells a lot of other batteries if one wants 12v or 24v. I use two 12v 206ah (2,636wh) in my fishing boat to run my electric bow mount motor. Had the same setup on my previous boat, too (sold those batteries when I sold that boat). For this most recent boat, I sold the 9.9hp gas kicker outboard because I could troll so well with the electric. These batteries are monsters. If I drained them from 100% to 0%, calculations based on rear-world amp draw shows I can troll 2mph for 27 hours or 3mph for over 9 hours. I typically keep them at around 80% State of Charge (SOC), go and troll for 5+ hours and come home having used less than 20% capacity, so I only charge every 2 or 3 trips to bring them back to 80% SOC. Each 206ah battery weighs 48lbs which is less than the typical 75ah lead acid battery that are only supposed to be discharged to 50% SOC (so their capacity was really 37.5ah). All the weight is mid-boat which is great for weight distribution plus, I got rid of the 100lb kicker off the transom and don't need to do annual engine oil changes and lower unit oil change.

The lifepo4 typically don't like huge loads like for starting applications, but Dakota brand makes a 60ah and 100ah lifepo4 battery that are rated to start outboards. I use the 60ah as my starter battery and to run all my 12v electronics (fish finder, livewell and bilge pumps, windshield wipers, radio, wash down pump, etc.) and the battery weights 16.5 lbs! Lead acid starter battery was 50lb and had 1/2 the useable amp hours.

Our slide-in, pop-up pickup camper uses BattleBorne 100ah as that is the only battery that would fit in the compartment (SOK are wider than typical or I'd have used SOK). Battleborne has performed great also. More expensive for the same thing. I know a few people using Battleborne "270Ah 12V LiFePO4 Deep Cycle GC3 Battery" and they are very happy with them.

I've only used these brands so will use them as an example since I have personal experience with these three brands and trust them. Lots of other good brands out there (and, some really horrible brands out there as far as internal construction). But thought I'd use these brands for cost comparison to the powerwall battery in the original post and just to compare to each other (since I was curious).

To get to about 10kwh would be as follows. Bikes only have 6.6kWh battery, so if you didn't need to fully charge and were just topping off at a track between sessions, maybe one would only need 5kWh. But I used 10kWh just for comparison. Cut price in half for 5kWh, which really isn't too bad.

Besides the battery, then you just need, at a minimum, a battery charger and an inverter. Inverter should be a 240v inverter faster Varg charge times over the 120v charging voltage. Charger would be programable, lifepo4-compatible and could be a relatively small/economical one since one can likely afford the charge cycle to take 20 to 40 hours unless you are doing back-to-back riding days. If you want to get fancy, you can add solar panel(s) and charge controller and charge battery back over over the course a week so it's ready to go for the next weekend. And/or add a DC/DC charger to your vehicle. Keep in mind solar panels don't capture very much energy. A typical 12v 200w panel will recharge a battery bank about 0.6kWh - 0.8kWh in an entire day depending on sun exposure, angle, atmosphere (clouds), and charge controller efficiency.

For those that want everything built into one unit, Bluetti makes some good "Solar Generators" (goofy name but that is the common nomenclature for a unit with a built in battery, AC inverter, DC converters, AC charger, and solar controller with the intent that they are typically paired with solar panels). Some of their units have all of the components plus the battery built in and some have all the components except for the battery. One adds on battery modules to those units. And some units have 240v Split Phase Bonding so you combine two units using an accessory Fusion box to get 240v. By far the most expensive solution, but an option. We have one of the medium sized Bluetti all-in-ones; the AC200. It's onboard battery is only about 2kWh, but it's been good enough for occasional home power outages and portable enough to easily move around the house or throw in a vehicle (Plus, I bought back when they were 1/2 the price as a backer introductory price, which helped).

Regarding the Varg battery, it will be interesting to hear cost for a second battery and to see someone swap it. Plenty of swap out info has been shared, but seeing one done will help people determine if that is an option for them. My opinion is your money is better spent on batteries/inverter as a means to charge the Varg rather than a second Varg battery since the batteries can be used for other things rather than spending your money on a proprietary Varg battery which isn't usable for anything else. Plus, in many riding scenarios, you won't have fully discharged battery 1. Being able to just add some juice to a 1/2 depleted battery is a better alternative to running battery 1 down to 10% - 20% then swapping to battery 2 exactly at that time.

The battery bank in my motovan came in super handy when I attended AJ Catanzaro's riding schools. The two times that I attended his school were two very long days of MX track riding with random short breaks. Waiting for a bike to charge was not a good option, so I was bringing two fully charged bikes. When one bike would start running low, I would put it to charge and ride the other. My 16x Basen batteries with a total capacity of 1,120 A @12V (or 13.4 kWh) allowed me to charge my Altas at the track 2.5 times. I drained 4 bike batteries and the van's battery bank completely, but still had 1/2 a battery remaining in one of the bikes.
C

I'd like to have more capacity in our current pickup camper, but as mentioned, it only can fit one 100ah. The newer design of the same model had it's battery compartment moved/redesigned due to demand. It still can't fit the wider SOK brand, but it will fit two standard sized 100Ah lifepo4 or one of the big Battleborne G3 270Ah which is why I know some owners with experience with that particular battery. In two years, we hope to move to a flatbed version by the same camper company. That model has a large locker where the batteries can be stored and so has plenty of room. I'll likely do at least two of the SOK 206Ah, but may do four. So that will be 5.27kWh - 10.5kWh. To the stock propane cooktop, we plan to add, or replace with, an induction cooktop. We'll have a 120v inverter for the cooktop as well as recharging boat batteries, eMTB, Surrons, and Varg. Camper manufacturer offers a small DC Air Conditioner that we might consider and if so, then we'd do the 10.5kWh battery bank rathe than 5.27Ah bank. Probably will not add a 240v inverter since I won't have the need to fast charge Varg for trail riding. A 120v inverter and 4+ hour charge-time is fine for my needs.

Current camper has REDARC controller which is a combination 30amp AC charger (shore power), DC/DC charger (from pickup) and Solar Controller. We have one 200w panel, but new model would have two 200w and I might go up to four 200w. At 0.6 - 0.8kWh day per panel on a good day, four could produce about 2.4 - 3.2kWh per day. We typically use less than 0.4kWh (400 watts) per day in current camper, but don't have an inverter and so are only powering a small 65liter fridge, fan for propane cabin heater, fan for propane water heater, water pump, vent fans, lights and charging small usb devices. One 200w solar panel easily charges us back to 100% SOC each day. With the additional use cases of an inverter and all the potential loads described, two to four panels will be a better fit.

I'll likely rig a setup so I have an exterior 120v outlet available and then figure out how to securely have an extension cord supplying 120v to boat, enclosed trailer, or receiver dirtbike/bike carrier as I drive down the road should there be a time I want to charge while driving.

This setup will also come in handy for home power outage backup (within the confines of my 120v inverter capacity).
You must log in or register to reply here.
Similar threads