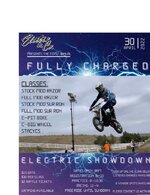 I'd like to post a little info on a really fun weekend I went to in Northern California. I think this might of been the first real All Electric Motorcycle Race's here in the states. The fact that it was only pit bikes doesn't make it any less. The biggest bike class was the big wheel class, in which my KX100's got 1st and 2nd. There was other's in the class with Kubergs, mod'ed KTM 85s, Surrons. Credit to our bikes, but this old fart wasn't the rider, but some young buck hot shoes were brought in...
It was put on at the Grass Ranch Pit Bike MX track in Escalon, CA, and thanks to the Grass family and helpers (Colin and Spencer also our 2 riders on the KX100's) for letting us into the fine facility. It was a great race day , perfect track , watered down all day and just a fun track to play on. I got a lot of laps in to on Friday and Sunday too.
There were at least 40-50 bikes, or riders, with kids riding the bike in one class and dad in another class. Dads were hauling the mail on their son's KTM after a quick stop at the charge stations they had set up.
It is amazing how many groups of families with all sorts of mod'ed up Razer's, up to 3000W brushed motors, and all kinds of shock mods racing them. Can you imagine a 200 lb'er racing that??? There were some broken parts...
Mark911 , you were invited to the event , and we could have settled the pit bike race, but my bikes ruled.
Thanks to Austin, his wife and crew for putting on an awesome event, with the help of the Grass Ranch family and crew. They want to bring back the electric KX100's for the next Gas bike pit bike races they put on and have their boys blow the doors off the gas bikes.
The track was 1/3 of a mile with about 10 bowl turns and about 10 jumps and tables. a couple of whoop sections. Great fun.
There is a link imbedded in Frank Vest's YouTube, to his channel, with all the laps of the Big wheel racing. I will post some videos up to my You Tube channel also, a little later.
Here are some samples, the first is Frank Vest's YouTube channel, and he has more videos of the Big Wheel Race.
This is my YouTube channel, and I will post some more a little later.
Don
Here is an unhappy kid, mom and dad had to take him off the track for the big bike practice... 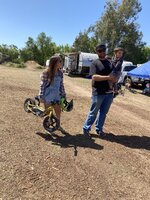 That is awesome and looks like so much fun. Thanks for posting.

That's very cool. Let me know when they are a Full bike size race. Maybe get a bike out there for that.

Sort of peripheral to this conversation. But since you mentioned Stacyc, I see they’re introducing new 18” and 20” bikes for bigger kids. Saw the ad on the last Supercross broadcast. These would have definitely been on the list for my kids when they were younger.

You must log in or register to reply here.
Similar threads