My kickstand was getting shorter - it's been angling forward more and more. I didn't realize how bad it was till I put the WP shock back on for fork testing (my shorter Ohlins was still apart) and the kickstand would barely keep the bike upright.

The Alta kickstand is high quality and well designed, except for one thing; with the kickstand down, the front stop & leg make contact on their rounded edges only. My stop bent and wore a 'divot' in the leg aluminum, then it began to rotate forward in the down position. Imo the best fix would be to build up the stop on both sides w/weld bead and then file the enlarged stop's rear side flat with the leg, but I went with something easier for now.

I tried heating the stop with a torch and bending it back, but I was afraid of either melting or breaking it off - I've done both to brake/clutch levers - so I didn't fully commit; this wouldn't have fixed the divot anyway. I ended up just JB Welding a small steel piece onto the leg, straddling the divot and filling it in with epoxy. Now it makes a nice 'clack!' against the stop instead of a wedging squeak. It's a cheesy-looking fix, but it works really well. With the Ohlins back on it stands straighter than ever, and it's easier to retract now as it just goes back & up instead of down/back/up. 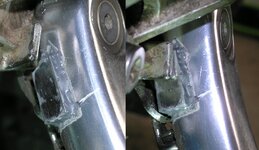 Nice write up Ray, thanks for sharing!

Sure! If I go the welding route I'll update with results. I use my kickstand a lot during rides to clear the trail, it's great to have it working well again.

Just remember not to put pressure on the kickstand when you are kickstarting the bike.

Just noticed something - on level pavement, turning the bars full right results in the bike being perfectly vertical; a small breeze would blow mine over. This is easily avoided on harder surfaces, but also works amazing sometimes in the dirt - I put the stand down in sand w/bars right & pushed it to the left a little, and the bike stayed upright and stable! Sure beats hunting around for a rock, or watching the bike do a slow motion fall-over while moving a tree limb.
You must log in or register to reply here.
Similar threads