Didn't really know which category to put this one in, but here's another super-complex machining project from Rancho Ray! I did this one years ago for my Zero, finally got around to adapting it to the Alta (the tubes are straight within .002", my camera not so much): 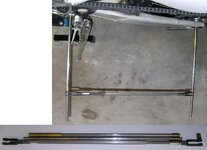 You won't need to make one, though - just set the LH chain adjustment (bottom scale) to + .5 over the RH chain adjustment (top scale). Assuming Alta swingarms are pretty much identical, this should get you much closer to where you want to be than adjusting both sides the same (which resulted in my bike pulling instantly to the right when the front end got light or airborne). My adjusters are set to 7.1 LH / 6.6 RH, and the bike tracks nice and straight w/the front wheel up or down. Each particular bike / tire set / etc. may need minor tweaking to get perfect.

This setup basically aligns the rear axle with the swingarm pivot bolt, performing what's generally referred to as a 'thrust angle' alignment (drive axle perpendicular to vehicle centerline). It's nowhere near equivalent to a 3-axis frame alignment jig, but on my bikes at least, it's much more accurate than the swingarm hash marks.

It's pretty simple; one 10mm-O.D., 610mm (24") long tube each into the rear axle and swingarm-pivot centers, with two adjustable yokes that slide along these tubes to ensure they're parallel. Yoke adjustment is done by rotating the center hex rod, which has LH and RH threads in the rod & inner yoke ends. The rear tube has a brass adaptor to fit the axle hole, while the front fits directly into the swingarm pivot bolt ID. To use it, I loosen the axle nut, lift the bike on the stand, insert the tubes, then adjust the yokes to fit the tube-centers distance and slide it in & out on the tubes until I'm happy with their alignment (usually 2 or 3 passes). I then leave the rod @ 2/3 of the way out & tighten up the axle nut most of the way, re-check the rod's ease of sliding in/out on the tubes, turn the axle adjuster(s) until they contact the axle sliders equally, then lower the bike and tighten the nut up fully. Diagrams available.

It's interesting how my bikes steered after being aligned with this jig. Beforehand, they were what I thought of as 'typical', with one direction having slightly easier steering than the other and a tendency to wander. Afterwards, the bikes held a straight line better and also had what felt like a slight 'power steering' effect, where my steering input caused the front wheel to move (or feel like it was moving) to the new line with what seemed like additional assistance / less resistance. This effect was completely symmetrical, and faded out after several chain adjustments - until the next time I re-aligned it and the feeling returned. It was fairly subtle and only really noticeable on the street; in the dirt the main differences were the absence of sideways pull mentioned and the ability to easily stay centered in ruts without the tires 'climbing the walls', which was the main reason I started this PITA project to begin with. It's amazing how precise the steering is now - I even find myself using narrow raised areas between ruts (@ 4" to 10" wide in places) which I avoided even more than the ruts before.

Obviously there are plenty of string / straightedge / laser methods, which basically align the front wheel to the (likely crooked) rear. The ones I tried didn't work for me at all; "perfect" alignment every time, followed by crappy steering.

Here's the Tiger Wheel Gauge (idk if it's still available) which measures/compares the axle-SA pivot distances. It needs access to both sides of the SA pivot so it won't work on the Alta: 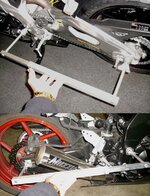 Wow!!! I love the idea and especially the execution!!! Thank you for sharing the pictures, Ray!

Hey, you're welcome, Philip - and thanks for the kind words! It's great to finally have some independent verification of the swingarm chain adjustments, which turned out to be about 8% off ! Hopefully the +.5-on-left compensation applies to all Altas, fingers crossed.
You must log in or register to reply here.
Similar threads