mr.skywalker said:
Im in the same boat. I have a heavily modded surron as well(60v65Ah battery, 16 rear wheel, marzocchi shock, ktm 65 front end, KO controller etc). Wish it was at least announced before I started modding mine.
Click to expand...

I've been wringing my hands for over a year now trying to decide if I should buy a Light Bee and mod it up ($$$). Held out mainly due to my height, at 6'5" just didn't think it would work too well. Then the Talaria Sting came out, and same thing, major hand wringing. Just when I was about to pull the trigger on a Talaria, I heard about the Ultra Bee coming out "soon".

Glad I waited as I'll fit on the Ultra a lot better then the other two, although it will still be too small for me, but all dirt bikes are a bit tight for me, even with all the usual tall guy mods.

For the Light Bees, I would think they would hold their value fairly well still, they are still plenty capable, and super light, gotta be a market for them used even with the Ultra Bee coming out I would think. Even though, for me personally, with these e-dirt bikes, when I have spent the coin on them I just figure I may or may not get a decent price if/when I sell them used, just too hard to judge how the market for them will go.
M

Yea Im pretty sure I could get close to price of the Ultra for my Light bee but it actually is already a good bike and my dad and wife are the ones who will use it the most now that Ive got a beta xtrainer. I was building the surron for hard enduro but it looks like those events I was planning to run have all been cancelled at least for the next year so its kind of in limbo for its use for me. My dad really likes the light bee bc its manageable for him but the xtrainer is just to easy to ride for me to want to ride the light bee on the trails I m on now. We are both on smaller side, hes 5'9 and Im barely 5'8. The Ultra would just be that perfect middle ground and keep the nice stock powertrain configuration and just slap on a 21 front and gummy 19 rear tire but then its basically to close to the xt for me to get it unless they start up the ebike class hard enduro again.

I do love my cross trainer( 2016 300CC) but I really only ride it when I travel somewhere to ride. I have a small amount of trails across the street and prefer my alta mx for there.
M

I have to drive to really ride anywhere. Nice thing is surron can go on the hitch of the car rather than having to use the truck or pull out the trailer for the beta. Mine is the 300 as well.

awesome bikes, I ride it when riding for the day, the Altas battery won't last that long. I'm not a racer anymore, I'm 64 and for trail riding the xtrainer is just so friendly and capable. sorry to rave about ice bikes on an ebike forum but these bikes are great.

Summary: he really likes it. Wants to try some suspension and wheel/tire tweaks.

I can't wait to get mine and see what its all about on the trails.

B. FRANK said:
I don't know about the ultra bee but the light bee cannot be street legal in the United States because it doesn't have a 17 digit vin #. early licensers got legal before anyone noticed what was happening. I was too late. perhaps the ultra bee also only has a 15 digit vin# too. many things are legal in Europe that aren't here. 2 strokes, trials bikes etc. don't get too excited about the electronics and pegs, they won't be on the u.s. models. sorry to be a bubble buster.
Click to expand... 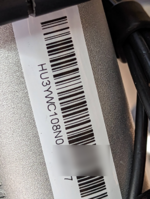 That is why many of us are going to a solid dirt bike and mod-ing them to Electric. The QS Motor , and ME motors on YX250F frames, the QS motor on CRF frames, the QS motor on RM frames. the QS motor on KX100 frames. All of these have known ride quality, and tons of aftermarket good stuff. Here is one YouTube of a DIY RM in a Hare Scramble. It is in other posts on this forum. The RM owner sells kits to do this to the RM with a quick change battery. Lithium-king.com
The guy that beats the RM off the gate is another DIY YZ electric build. If you want to see the others, I have you tube links to most of the others.

mjcother said:
My LBX's have a 17-digit VIN, it does not show up in the NHSTA database as valid, but it is 17 digits with a year digit of N (2022) and a valid check digit.

SUR RON HAS OBVIOUSLY ADDRESSED THE VIN DISCREPENCY. GOOD LUCK TO YOU
E

mjcother said:
My LBX's have a 17-digit VIN, it does not show up in the NHSTA database as valid, but it is 17 digits with a year digit of N (2022) and a valid check digit.

I have a LBX from europe with 17 digit vin. The first 3 characters are different from yours . Don't those identify the OEM?

Jury is still out on Ultra Bee VIN usefulness in my book until I see an actual photo from someone who has them in hand
You must log in or register to reply here.
Similar threads